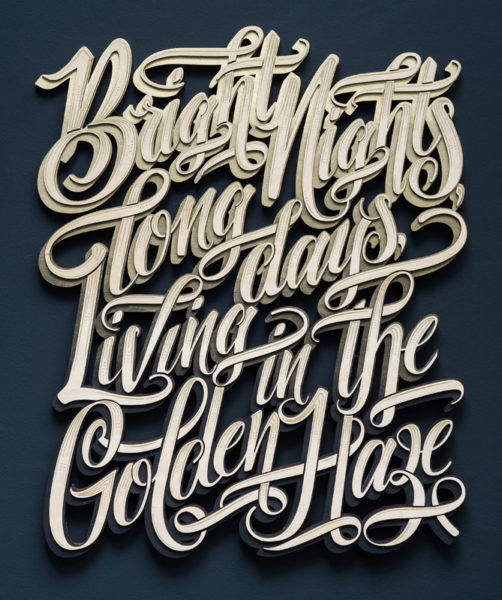 An exclusively paper-based exhibition, which celebrates the diversity and richness of paper as artistic medium. 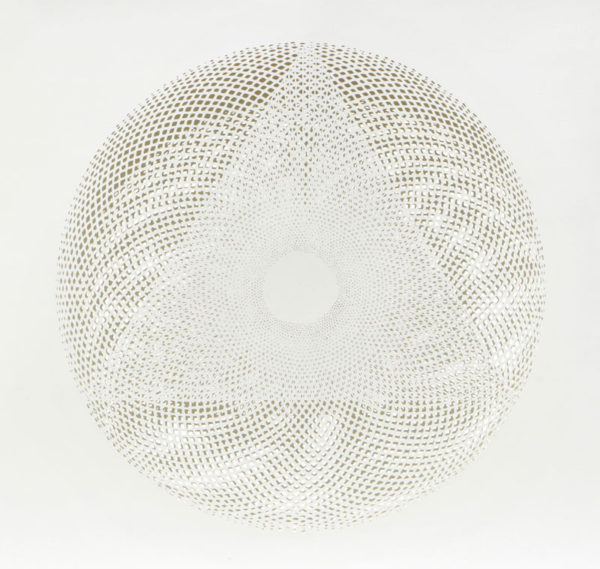 A solo exhibition by  Tahiti Pehrson

Tahiti Pehrson spent his early years without electricity growing up in a bohemian artist household in Northern California. Art was a mode of entertainment without television or music and long hours were spent in nature and drawing. Influenced by the burgeoning skateboarding and punk scene of the mid Nineteen-eighties and later engaging in the San Francisco street art and graffiti culture of the late Nineties. Traveling Europe and China in search of art enrichment and later attending the San Francisco Art Institute as a painting major, Pehrson left after a year and a half. A practice of stencil-making and street art evolved into a more and more detailed practice of paper cutting two and three-dimensional works.

Pehrson has been working and exhibiting in hand cut paper for the last fifteen years. Over the last five plus years his works have concentrated on highly detailed geometric patterns called Guilloche which date back to Classical Greek and Roman times, later to be perfected by the Rose Engine Lathe in France in the late 1700’s. Today these patterns can be seen on almost every currency in the world as well as hub cups watches and also seem to touch on the design sense intrinsic to nature. These highly detailed monochromatic works create with light and shadow a hypnotic field of Moire patterning.

With many intersections creating a larger fabric, themes in the work center around Connectivity, Systems, Variation and fragility.

For as long as I can remember I have used art to define and document my experiences. The inexactness of outcome always suited me and yet my work has evolved more and more towards exactness. In the process of cutting more and more detailed works I started to become aware of variation and indeed of repetition. Each shape morphing from square to diamond to triangle, and each variation leading to the next, all forming a larger fabric and pattern. A system connected. Our world is often defined by our differences rather than the reality of parts of a whole. I became interested in the things that make us the same. Even if art is reduced only to a visual experience, trying to create an experience that could both inspire and suggest a wide variety of narratives. The viewer is invited to tailor his/her own experience, and thus engaging personally. A person of faith may read and interpret religious or spiritual implications while a more scientifically minded individual could see Geometry yet both narratives describe a larger system encompassing a whole. There is a tension, which exists between the apparent fragility of the medium played against the strength of connectivity in a radiant fabric of variation.

Courtesy of / copyright of Juxtapoz

TAHITI PEHRSON DOCUMENTARY – TRAILER
During February 2014, we were blessed to host a solo exhibition by Tahiti Pehrson. While the artist and his travel companion were in Cape Town, they filmed part of a documentary on Tahiti’s career as artist and his passion for skateboarding, as well as the ways in which people are universally connected, hence the name of his solo exhibition, Connectivity. Watch the beautifully crafted trailer here, which features music by Bilderberg Motel.

Thank you Adrian Day of Baseline. 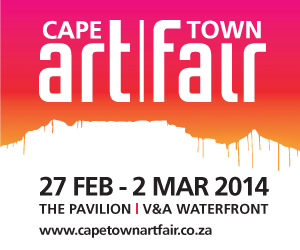 Salon91 will be participating in the second Cape Town Art Fair this February. 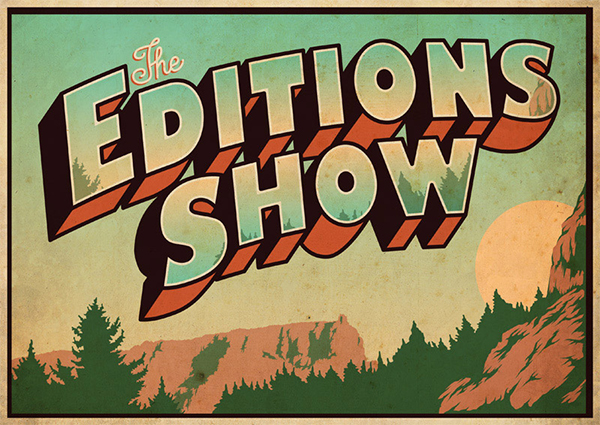 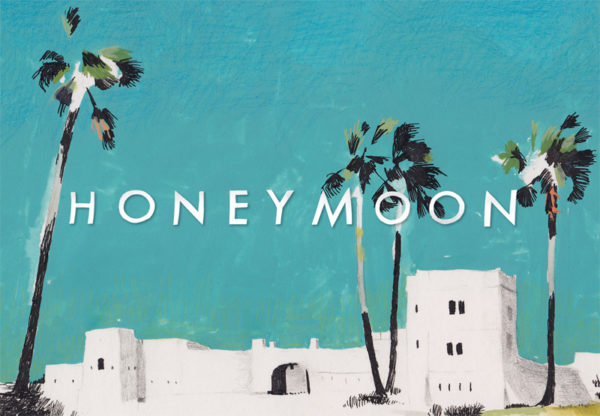 A solo show of drawings and paintings by Katrin Coetzer.

Honeymoon marks a personal current period in artist Katrin Coetzer’s life, where she is forging a connection between her inner world and the geographical spaces she visits – real, imaginary and remembered. Honeymoon further references a waning sweetness and suggests the meeting point of fantasy, place and memory. The content of this body of work is centered around themes of spatial exploration, & exotic vs local seen through the lenses of feeling and itinerary…

Katrin Coetzer was born in Cape Town, South Africa. She completed her BA in Visual Communication at Stellenbosch University in 2007 and a BPhil in Visual Art majoring in Illustration in 2012 at the same institution. During 2006 the artist was selected as a finalist in the Timo Smuts competition, at the US Gallery in Stellenbosch. Katrin has worked as a freelance designer and illustrator since 2008 and has exhibited her work in galleries both nationally and internationally. Selected group exhibitions in which the artist has participated, include, Fin, Stellenbosch University Graduate Exhibition (2007); Greatest Hits at the Association of Visual Arts, Cape Town 2008; Verf group show, Blank Projects Gallery, Cape Town 2008; Ontopoftheworld, group show Cape Town Stadium (June 2009); If you let yourself love a wild thing, group show at Salon 91, Cape Town (2011); Draft, group exhibition of selected Masters work, US gallery, Stellenbosch (2011); Safe Spaces group exhibition & campaign auction, Freeworld Design Centre, Cape Town (2011); Handbound, group exhibition coordinated by Prof Keith Dietrich, Sasol Gallery, Stellenbosch (2011); Winter Wonderland, group show at Salon 91, Cape Town (2011); Swatch Illustrative Berlin, selected in category Book Design, highly commended, Berlin (2011); & Paper is You, group show at Salon91 Cape Town (2011). Katrin was elected as a grant recipient in 2011 from the Stellenbosch University to attend Design and the City in Finland through the University of Helsinki, a summer course that explores the relationships between art, design, urbanism and spatial identity. During 2012 the artist exhibited her work at the Design Indaba Expo as part of the CCIBA/Stellenbosch University bookstand. The artist was also one of two South African artists selected to exhibit at the Illustrators Exhibition at the Bologna Children’s Book Fair in Italy. The same show toured throughout Japan with the Itabashi Art Museum from May 2012 to 2013. The artist is currently living & working in Cape Town. 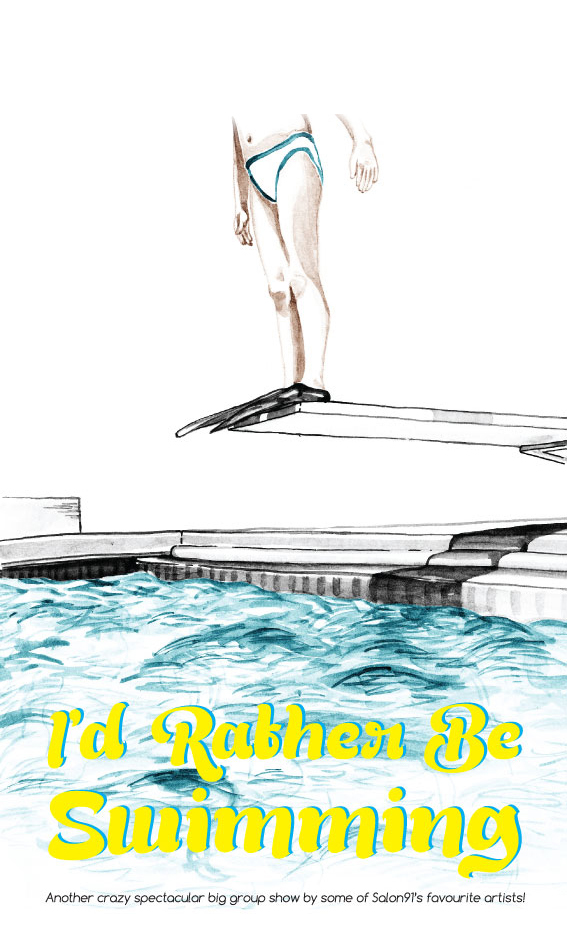 ‘I‘d Rather Be Swimming’ End of year Group Salon in association with the  I AM WATER ocean conservation trust, featuring some Salon91 favourites as well as some fresh all-new local talent.

As passionate Ocean lovers, I AM WATER, founded by champion freediver Hanli Prinsloo, strives to share the joy aquatic with as wide an audience as possible. With the help of Salon 91 water will once again take centre stage, as it should! We are all Water, and we all share the opportunity and challenge to protect our last wilderness beneath the waves. The I am Water Ocean Conservation Trust aims to do this through education and awareness, spreading the love and protection of the oceans through introducing South Africans from all walks of life to the ocean environment & important conservation issues.

Marieke Prinsloo-Rowe, best known for her beautiful swimmer sculptures, which were installed at the Sea Point Promenade until recently, will be the guest speaker at the opening.

Salon91 &  I AM WATER will be hosting a beach clean up on Sunday the 20th of January 2013 at 10:00 am. We would love for the Salon91 community & everyone who appreciates nature, art or the ocean to get involved. Please contact us on info@salon91.co.za if you would like to help out.

Artists to be participating in ‘I’d rather be swimming’:

About ~ Shoes From Chinese Ships

Walking on Strand beach near Cape Town one comes across a proliferation of shoes and other plastic debris from China scattered along the high-tide mark. From the survivors of a Ming dynasty shipwreck integrating into Kenyan society, to the story of a giraffe being welcomed to China as unicorn in the early 15 th century, the history of shoreline arrivals and trade between Africa and China is a long and often mysterious one.
Taking the sea, the vehicle for the original contact between China and Africa, as a point of departure Shoes From Chinese Ships features both emerging and established Chinese and South African artists. The show is a conversation in painting, drawing, installation and sculpture between the intricate and increasingly complicated relationship between Africa and China. Interrupting the commercial import/export relationship and replacing it with an integrated one that allows for a more personal discourse with a faraway place, the exhibition includes a collaboration between some of the South African artists involved and students from the China Academy of Art in Hangzhou. Living and working all around the world the artists explore the mystery, depth and intricacy of exchanges brought about by trade between these two countries throughout the centuries.

Working from China, South Africa, Germany and France the artists selected for Shoes From Chinese Ships are all of South African or Chinese nationality. The artists were selected for their visual and conceptual sensibilities, particularly the elements of nostalgia, fragility, mystery and displacement that tie their works together…

Students from The China Academy

Students from The China Academy of Art are participating in collaboration with the South African artists listed above. The China Academy of Art is the most influential academy of fine arts in China with the most complete range of degree offerings and programs of study. It houses a diverse pool of artistic talent, with a focus on integrating theory and practice. Combining modern technical and cultural disciplines with traditional ones, the academy encompasses fine art, architecture, film and new media.