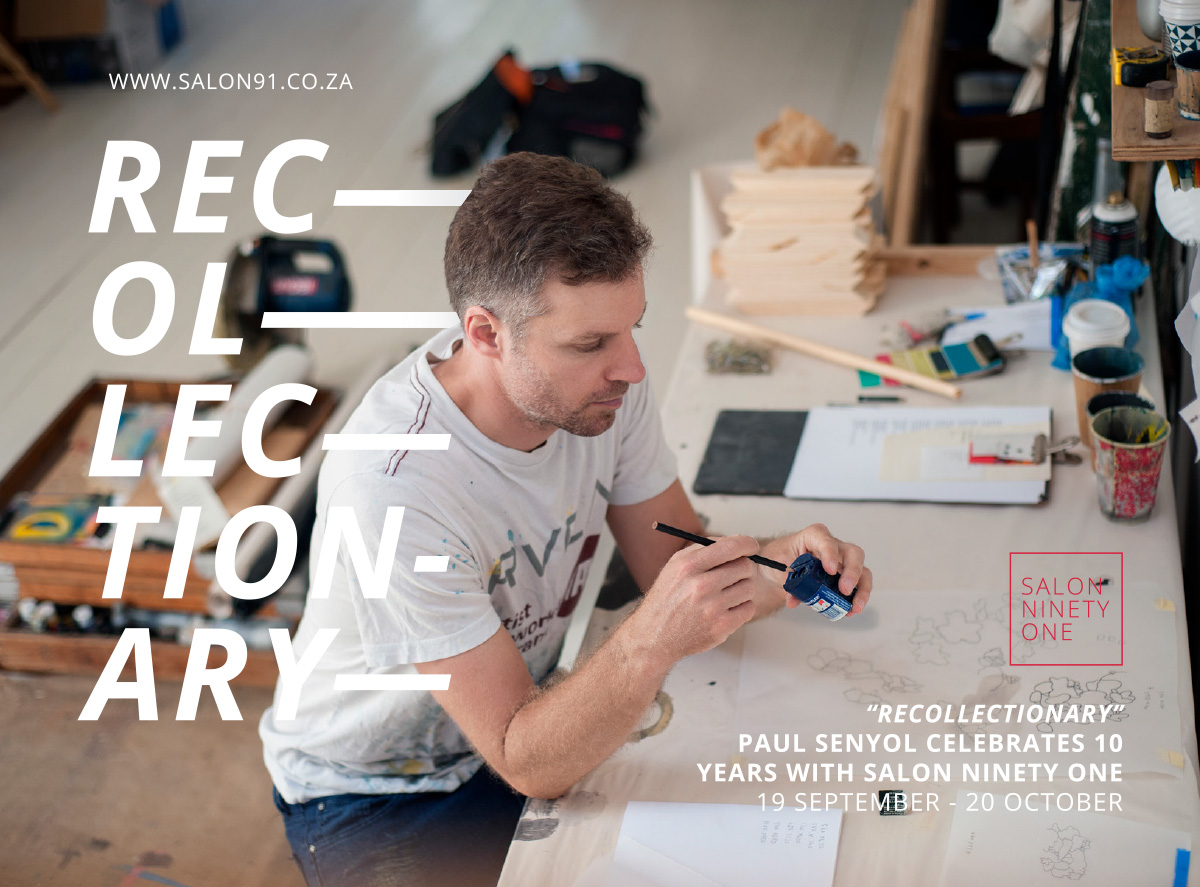 Salon Ninety One & Paul Senyol are truly proud and grateful to be celebrating a decade of working, growing and exhibiting together, as well as the beautiful friendship that has formed between Gallery and Artist over the years. Paul Senyol & Wesley van Eeden were the first artists to exhibit at Salon91 back in October 2008 in a two-man show, beautifully named Under These Skies. The Gallery and Artist will be marking the event and this special relationship with an exhibition titled Recollectionary: 10 Years of Paul Senyol & Salon Ninety One. This solo show takes on the form of a mini-retrospective featuring works on paper, board, canvas, as well as found objects and more, and will be accompanied by the launch of a publication, centered around the Artist’s development and innovation between 2008 and 2018. Recollectionary is on view at Salon Ninety One from the 19th of September until the 20th of October 2018.

RELATED TO THIS EXHIBIT:

I have been coming to visit Paul at his studio in Woodstock for some years now. As I turn off the main road, bannered with newer, brighter street art, and begin to meander the one-way street network the homely scratches and scribbles of the local community take over. I see traces of Paul’s early street works and also notice the things that have been erased.

He always greets with a bright smile no matter how little sleep he’s getting as a new father. Our conversation traverses the familiar and foreign territory of a new body of work in progress as I sip tea and consider the canvases in various states of progress before us.

Natasha Norman: Your show is called Recollectionary, it’s about thinking back on the last ten years of making work. How do thoughts about the past come into these new works for the show?

Paul Senyol: The works are straddling something, recollecting those thoughts and ideas and shapes and forms and colours. Some of the works are literal reinterpretations of some of the older works. I’ve taken an old painting from 2010 or 2011 and quite intentionally replicated certain colours, certain patterns and shapes. The viewer would really have to scrounge around to get the original reference, I think. But I’m being quite intentional.

NN: And how does that feel?

PS: It’s cool. I like looking back. I like assimilating. I like putting things back together. I’m enjoying it. I think I’d like to paint a bit more that way in the future. I’d like to think a bit more about the history, in a sense, a bit more about the amount of visual information floating around in my head (laughs). I feel like those older works have given a spark to what’s happening here.

NN: That links to some of the things we discussed when we looked back at your works. You were showing me images of walls that you’d done and then said, ‘oh, that’s no longer there,’ or, ‘this still exists.’ In the street, there’s a very real process, over time that edits.

PS: I always like the idea that someone is going to peel bits of wall away in Woodstock, like a cross-section, and expose layers of paint. It happens in many places but particularly in Woodstock it will be a Recollectionary of those conversations or passers by, which is quite interesting.

NN: You layer your works quite hectically from start to finish. In the process the surfaces are quite transformed. Does that mimic the process on the street?

PS: I suppose it does. That’s not the intention when I start the painting, to mimic that process, but I think subconsciously I just do.

NN: It’s a process you have an affinity with.

PS: Ja. I suppose it just comes with being very DIY and self-taught. That’s my process of reinterpretation and assimilation, I suppose. In terms of painting, that’s just the way it finds expression.

NN: Do you find the process thrilling?

PS: Ja, ja, ja. It’s quite intimidating at the start, when you just start. For me it can be quite intimidating, having this canvas, but even just having the drawing in front of me is a bit of an exhale. And then when I just start to play a little bit with the first brushstrokes that are more unintentional at the start: washes or the first brush marks, as long as I’ve started that then I can start to think a little more clearly about what’s going to happen on the canvas. Even though I have the drawing, it’s still quite spontaneous when I paint. Stuff changes. Colours change and the stuff that I’ve traced there will not be one hundred percent as it’s mapped out there.

NN: You said that having the drawing there made you exhale, with relief. But you didn’t always have the drawing as part of your process.

PS: I think I discovered that way of working in about 2011. So it’s quite a few years down the road now. That’s primarily how I paint now. To some degree I do still dip back into spontaneity and I don’t worry too much about what I’m thinking. I’m rather just going to paint and see. That’s quite a cool way of painting for me.

NN: What do you see as the function of installation or sculpture in your exhibitions?

PS: In shows previously I have worked in installation and I would like to carry some of that stuff forward. They function as reference points. I have a few objects that I want to show, I don’t see them as particularly part of an installation but they are sculptural. As objects they have a shape and form that is interesting.
I’ve taken these objects out of their natural environment and put them in a temporary space that informs the work.

NN: People are forced to consider those objects differently in your exhibitions. If they had seen them on the street they might have walked past or ignored them.

PS: Ja. I don’t know if I showed you that nice, big, fat piece of sidewalk? No, I told you about it. It’s incredibly heavy, so heavy. I just managed to get it into the back of the car without, like, chopping my toes off. And I’ve got this great, old skateboard, which was my first skateboard, which was my Dad’s first skateboard. I don’t know how many years old, but it’s got clay wheels. In the gallery space there will be a place for me to paint on the wall and have these objects on the wall and then one or two paintings that I feel would fit with those objects.

NN: So it’s about these conversations between things, I see that as a theme throughout your body of work: you wrote letters to Andrew that you delivered to each other.

NN: Yes, they were physical objects you exchanged as well as having conversations with other writers on the street: graffiti phrases that each of you wrote responses to on public walls. So the space of your work has changed but you still want to encourage a conversation to happen in the mind of the viewer.

PS: When I first tried to explore the gallery route I got rejected. People didn’t want to see my work or show it. So my reason for putting work on the street was, well if they’re not going to see it in the galleries then they can just see it on the sidewalk or street corner. So that’s how I started exhibiting. I felt my work was worthy to be seen and people might like it. If they want to see it they can and if they don’t then they can just look away. So ja, that engagement with the viewer, for me, is important. If a painting moves someone – they really like it – then I think I’m succeeding as a painter, as a creative, in doing something. Not everybody is going to enjoy it, it’s not everybody’s cup of tea, abstract painting, but I think that within abstract painting there is something of a feeling that gets ‘conversed’ through the work. I supposed I’m after that.

NN: By ‘a feeling’ do you mean that through your work you’re trying to connect with something in someone else?

PS: Ja. They’ve understood. I’m not necessarily about people saying, “What is it?” Or, “What is this?” “Tell me what’s going on here.” There are figurative elements but they’re radically abstracted. I know where I’ve drawn that source from, maybe a book or a magazine or on my travels through the city, but people don’t necessarily need to know that, it’s not what I’m after. That’s not interesting to me.

NN: It also seems to be about slowing down the gaze. To consider things, usually thought of as disposable as quite beautiful.

PS: Ja, very much so. I like that: the edges, the margins. I like the spaces in between. Yes. That’s interesting to explore.

NN: Have you always liked those spaces?

PS: Probably. I think skateboarding initially highlighted those spaces to me: those places and those objects and those things. So that’s where that connection comes in.

We begin to look at a work on the wall of his studio.

NN: What is it called?

NN: Margymnal? I don’t know what that means.

PS: Ha ha! Nobody does! Only me. It’s a title that I made up. A lot of the starting points for these paintings have also been older works where I’ve changed the titles or played with titles a bit. So Margymnal is the same as Recollectionary, it’s two words in one. Margymnal is ‘hymnal’ and ‘margin’ put together. So that’s the title. Bit of a tongue twister.

NN: How do you decide on a title?

PS: I like to give them names, like the name of a person. I like that part of a title. I like a title to carry some sort of weight, as opposed to just untitled works. I like to give my works a character. The work already has character but the title, I’m hoping, complements or highlights that character.

NN: We’ve conducted this interview at the end of a long day of painting. Do you have any concluding thoughts on the act of painting itself?

PS: In a day or two’s time there’s going to be something on that canvas that wasn’t there before. Painting is exploring and, not scientific necessarily, but pretty awesome. To create something is … ja … I’d like to think about that some more.

Natasha Norman is a practicing artist and freelance writer. She has written and published on Contemporary South African Artists in both popular and peer reviewed journals. She has worked with artists on text for their exhibitions since 2007 and currently lectures part-time at Universities and Institutions throughout South Africa. On her days off, she surfs.